After posting a link to the Darwin Men’s Shed on the Menssheds Manitoba Facebook page, Doug Mackie of the Woodhaven Shed and Men’s Sheds Canada asked if I could post info about the 2018 Gallagher Men’s Sheds Conference being held at the Cannington Exhibition Centre in Australia on Thursday 25 October, 2018.

Hopefully someone from here will be attending the event, but after reading the special conference edition of The Warbler, I was so inspired by the idea of an event devoted to promoting and supporting the Men’s Shed movement, particularly those sheds in Western Australia (WA), that I decided to do more than simply post a link.

For those of you who don’t know, the Men’s Sheds movement began in Australia. Its roots have been traced back to:

Men’s sheds originated from the shed in a backyard scenario where a man would go and carry out tasks, such as restoring furniture or fixing lawn mowers. The first Men’s Shed by that name was opened in Tongala, Victoria, on July 26, 1998, followed a few months later by the Lane Cove Community Shed in NSW.

Today, there are more than 2,000 Men’s Sheds across Australia, New Zealand, Scotland, England, Wales, Ireland, Finland, Greece, and United States, and there are currently 16 in five Canadian provinces.

Here in Manitoba, there are three sheds – Woodhaven Men’s Shed (200 Glendale Blvd) and Park City Men’s Shed (180 Poplar Ave) in Winnipeg, and the Minnedosa Men’s Shed in Minnedosa. Other sheds are already in the works.

The Woodhaven Shed opened in January 2010, thanks to Doug Mackie and Dave Friesen, and was the first shed in Canada. Visit their Facebook page or simply turn up at 200 Glendale Blvd on Tuesday and Wednesday afternoons from 1:00 pm.

Anyway, back to the Conference in WA. The official opening will be conducted by the Honourable Kim Beazley AC, Governor of WA, and Mark Folkard MLA will be representing Hon Simone McGurk MLA, Minister for Community Services.

Speakers and topics include:

That is quite the line-up for what promises to be a fantastic event! There is clearly a lot of support for men’s health and the Men’s Sheds movement in Australia, and many sponsors and funders are committed to making sure that continues. Inspiring for those who are committed to ensuring the same level of support for other Sheds in other countries around the world, especially here in Canada.

For more information, and an interesting read, check out the special conference edition of The Warbler.

Yesterday, I was out for an early morning walk, happily engaged in a conversation with a friend,  when I suddenly found myself lying flat on the ground.

I had fallen victim to one of many rising concrete slabs along the walking paths in our neighbourhood.

Not the first time it has happened, and I was walking and talking at the time, so clearly I don’t pay enough attention to what lies underfoot.

In my defence, however, I’ve noticed of late there seems to be more individual slabs on paths raised at dangerous angles than there used to be. And while shifting ground levels and crumbling surfaces due to freezing and thawing is part of life in Winnipeg, it’s disappointing if you can’t safely go for a walk around the block without ‘running’ the risk of falling down and potentially injuring yourself.

About two years ago after three other trips and falls, I changed to walking on the roads. They have their own issues with potholes and widening joints, but those are easier to see and navigate … although that didn’t stop me from catching my toe on a protruding strip of the tar used to seal those joints, and crash painfully to the ground.

My mum’s words rang loudly in my ears: “Pick up your feet, Jennifer!” Necessary advice in my clumsy youth, and never more true than here in Winnipeg.

I often walk along paths where city crews have either shaved off the concrete to even out the path, or replaced them altogether. I have also walked down roads where there seem to be more holes than driveable surface. And as much as we want all these problems fixed “immediately”, the reality is crews can’t be everywhere and can’t fix everything if they don’t know where to look.

Which is why earlier this summer I documented the many sidewalk and road issues along a 3-block stretch of our street and sent it to our local city councillor, along with an invitation to take a drive and see for himself. He promptly contacted Public Works, who came out on two occasions to repair the major issues – including the pothole locals had appropriately dubbed “The Destroyer” – with a promise to take care of the rest in the near future.

Keeping sidewalks and roads in good condition here is a frustrating and never-ending story, hence the oft-repeated joke about Winnipeg having only two seasons – winter and construction. And while in this blog I make light of the rising sidewalk slabs, potholed roads and crumbling surfaces, for most people it is the problem that simply won’t go away, and can negatively impact many in our community whenever they go out their front door.

Oh, for a magic wand and a mountain of money.

For my part, I will continue to do what I can to let the powers that be know about things that need fixing, and make the case for them to act quickly.

And since I like to talk while I walk, I have no other choice but to do my best to stay upright by picking up my feet and paying more attention to what lies underfoot whenever I go out for a walk in our neighbourhood.

I drove a friend to the airport yesterday, fully expecting to lay out a chunk of change for the convenience of parking in the lot closest to the terminal. For financial reasons, I briefly considered the Economy lot, but who wants to walk for 7 minutes when you can do it in 2? 🙂

We decided to get there early – 7:15 – to avoid any potential early morning rush-hour queues, and also to have breakfast at Stella’s.

On the way in, I read the cost to park as $2.50 for each half hour, which means I should have paid $10 on the way out. But surprise, surprise – it only cost me $5. END_OF_DOCUMENT_TOKEN_TO_BE_REPLACED

Monday started out as usual. Early morning darkness gave way to light, street lights switched off, the traffic began as a trickle of cars, and people were slowly getting started with their day.

The Bus Stop was looking forward to seeing his usual gathering of people, all dressed for success, engaged in conversation or reading their books or watching for the bus to arrive. END_OF_DOCUMENT_TOKEN_TO_BE_REPLACED

When fictional character Leslie Knope (Parks and Recreation) said, “Why would anybody ever eat anything besides breakfast food?”, she must have been reading my mind.

I have long been a believer in the breakfast menu because of the selection, the cost, the ‘all day’ factor, and the company. (In my experience, after you wake up your friends and then beg their forgiveness, you can usually talk them into joining you for a hearty and delicious breakfast.)

Yes, I am a breakfast person to the core, and will happily opt for bacon and eggs, omelette, French toast, pancakes and oatmeal anytime of the day or night. Excellent ‘thinking’ food, I say. END_OF_DOCUMENT_TOKEN_TO_BE_REPLACED 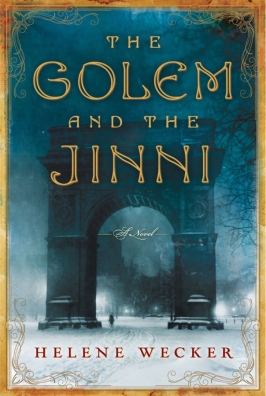 If you are looking for an excellent read, I would like to suggest Helene Wecker’s debut novel The Golem and The Jinni.

According to the official synopsis, this is “[a]n immigrant tale that combines elements of Jewish and Arab folk mythology [to tell] the story of two supernatural creatures who arrive separately in New York in 1899. One is a golem, created out of clay to be her master’s wife—but he dies at sea, leaving her disoriented and overwhelmed as their ship arrives in New York Harbor. The other is a jinni, a being of fire, trapped for a thousand years in a copper flask before a tinsmith in Manhattan’s Little Syria releases him. END_OF_DOCUMENT_TOKEN_TO_BE_REPLACED

On Wednesday while driving to meet a friend for coffee just south of the Chief Peguis Trail, I was delayed en route by an abundance of red traffic lights. While stuck for an inordinate amount of time at one set of lights, I thought about a recent drive to the same location that prompted a blog left unposted. Reading it brought back such wonderful memories that I thought I’d share it now …

“Today at 9:00 am, I drove all the way from Polo Park (St James) in the west end of Winnipeg to Hespeler Avenue (Elmwood) in the north end without stopping at a single traffic light. END_OF_DOCUMENT_TOKEN_TO_BE_REPLACED

On December 25, I broke the little toe on my right foot. When I saw it sticking out sideways, I decided I should do something to fix it. Given the date, and not really sure where to go anyway, I opted to use poor judgement and do what the doctor (i.e., man in a white coat in a doctory looking office) did in the online video – reset it myself.

Already in pain, I didn’t think I had anything to lose. Fortunately I did everything right, and my doctor was impressed, to say the least.

“You reduced it yourself?”

Two doctors and three X-rays later, it’s official – I have an oblique fracture involving the shaft of the fifth proximal phalanx. No significant displacement or angulation is identified. All of which means it is broken, but along the length of the bone rather than snapped in two. END_OF_DOCUMENT_TOKEN_TO_BE_REPLACED

As a freelancer, I spend a lot of time in my office with my computer. Occasionally, however, I like to go outside and spend time in ‘people places’.

Coffee shops are my ‘people places’ of choice, closely followed by libraries and gardens, particularly the Garden of Memories.

Tucked away in a quiet corner of Air Force Heritage Park at 17 Wing Winnipeg (Air Force Way), Garden of Memories is a moving tribute to those who trained and served in the British Commonwealth Air Training Plan (BCATP). END_OF_DOCUMENT_TOKEN_TO_BE_REPLACED

Retirement for most people means having more time to relax and take it easy. But for St. James resident Art Brown, it means heading off on a 122-day biking adventure exploring the southern part of Australia.

When the 38-year-veteran of the RCAF retired late last year, his sights were firmly set on this, his first solo bike trip. And so far, so good. “I decided not to plan too much detail, other than a general sense of direction, so I’d have plenty of opportunity to explore based on encounters with locals and fellow travellers.” END_OF_DOCUMENT_TOKEN_TO_BE_REPLACED